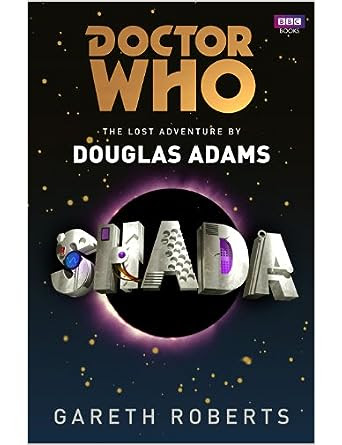 Despite not being a huge fan of the series, this is the second Doctor Who book I have read this year. Like The Coming of the Terraphiles, I picked up Shada because it is connected to one of my favourite authors.  Unlike Michael Moorcock's novel, though, Shada is excellent.

One of the most famous Doctor Who stories is one which has never been shown. It was one of the three written by Douglas Adams while he was working as script editor on the series in the early eighties. Ffilming was interrupted by a studio technicians' strike, and was never resumed, for a variety of reasons. Now, Gareth Roberts has completed the story, re-working parts of it and extending it to a full novel length. Douglas Adams was, he later said, relieved by the interruption; he was almost as famous for his inability to keep to deadlines as he was for his humour, and Shada was still incomplete even as filming was under way. Roberts took various versions - a video of the incomplete series released by the BBC in the 1990s and script drafts mainly, and put together this novel, clearly a labour of love for one of the scriptwriters who has worked on the more recent revived Doctor Who.

The story shares a character with Dirk Gently's Holistic Detective Agency, which was written by Adams later in the eighties, in the person of Urban Chronotis, Regius Professor of Chronology. Shada, though, is the story for which he was originally conceived, and he naturally fits very well into the Doctor Who mythos. In Shada, Professor Chronotis turns out to have one of the ancient talismanic artifacts of the Time Lords hidden among the books in his Cambridge college rooms, and this becomes the target for megalomaniac alien Skagra who wants to take over the whole universe and "tidy it up". This brings the Doctor calling, along with Romana and K9, as they try to retrieve the artifact and thwart Skagre - and find out who, or what, the mysterious Shada is.

This is a genuinely good novel - easily the best Doctor Who novelisation I have ever read. Moreover, I have read two other books which appeared after Douglas Adams' death and which were intended to supplement the novels published in his lifetime, Salmon of Doubt and And Another Thing. Neither were very good, but Shada is truly a worthy addition to the Adams canon - well written, funny where necessary, full of interesting ideas. Hats off to Gareth Roberts for his efforts here. Now, if only the Adams estate had asked him to write the continuation of The Hitch Hiker's Guide to the Galaxy...

Posted by Simon McLeish at 20:54 No comments: