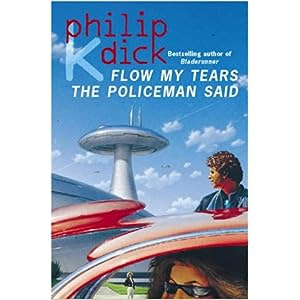 Philip K. Dick was not an author who concerned himself greatly with the scientific plausibility of the backgrounds to his novels in the way that many of his contemporaries (Larry Niven, for example) did. However, there are many contemporary echoes thirty years on of his paranoid tales; he writing is of now in a way that most writers in any genre can only dream about. What we get in this novel, apart from one of Dick's weirdest titles (the policeman is a fan of John Dowland), includes resonances with identity theft and the possibility of unknown celebrities as we see in so many "celebrity" special editions of reality TV shows at the moment. There is also an element of parody of the fairly common science fiction idea of a genetically superior race within mankind, as described in all seriousness by writers such as AE van Vogt (and to which the back story of many superhero comic strips can be related, from Superman to the X Men).

Jason Taverner is a product of genetic engineering experiments - a "Six", because he was produced by the sixth series of such experiments - and host of the world's top-rated TV show. But one morning he wakes up in a sleazy hotel, and discovers that not only is he unable to prove who he is and regain the privileged life that used to be his, but nobody even recognises him or remembers his work. While not precisely identity theft - identity loss would be more like it - this fits in with current fears, in the UK at least, of what might happen with the introduction of identity cards tied to a single central database, obviously due to become the country's biggest hacker target.

As our society continues every day to become more dependent on technology for smooth running, the consequences of any breakdown become proportionately more serious. Increasing complexity makes it harder to ensure the security of even the most crucial systems, as well as taking the technology as a whole beyond the grasp of a single engineer. However, introducing measures to deal with these consequences can compromise the security of the entire system: to put in a "back door" to recover a stolen identity, for example, can provide a new method to steal one in the first place.

In the end, though, Dick ends up copping out. Jason Taverner recovers his identity, but effectively this happens through Dick going outside the system he has used to set up this novel. The story slips into drug taking and the insights it gives into the nature of reality; this time the abundance of ideas in one of Dick's novels undermines the plot. Effectively, it reads as though he paints himself into a corner, but then discovers the ability to walk through walls; frustrating for the reader, who wants to know what clever idea will be used to get round the problems. Both the drugs and the nature of reality (specifically, how we know that what we experience is real and not a hallucination) are long term preoccupations of Dick's, and both are better dealt with elsewhere in his fiction. So this ending is a major disappointment in what could have been a fascinating novel.
Posted by Simon McLeish at 14:50 No comments: