Stella Gibbons is overwhelmingly best known as the author of the hilarious Cold Comfort Farm; so much so that I was surprised to discover the existence of another novel. (It was in a furniture shop, one of a number of old second hand books used to make bookcase shelves look less bare; the shop assistant offered it to me when I picked it up and started looking through it.)

There are many stories about how people endured hardship during the Second World War; less well remembered (as less glamorous) is that life continued to be difficult for many people for some years following its end. In Britain, it was the first war accompanied by massive destruction at home for centuries (since the Civil War in England, or the Jacobean rising in Scotland). Many families were bombed out, and food rationing continued for years. The Matchmaker is about one such family, driven from a middle class existence to a poor cottage in the country, and the people that they meet in the neighbourhood.

The father of the three girls is still in the army, on duty in occupied Germany, so the main focus is on their mother, Alda. She is the incorrigible matchmaker of the title, continually trying to pair people up. (This isn't apparent until the second half of the novel; up till then, Gibbons is describing how Alda and the girls settle in and establishing the characters of those around them, including the Italian prisoners of war working on the neighbouring farm.)

No one who reads this novel now, as forgotten as the aspect of post-War Britain it describes, is likely to be unfamiliar with Cold Comfort Farm. This makes it virtually impossible to read without constantly comparing the two. There are obvious links - both being about the English countryside, portraying it without the sentimentality that pastoral themes often evoke (Cold Comfort Farm is in part an attack on this tendency) - but at first there seem to be more differences. For a start, The Matchmaker doesn't seem to be funny. It is only towards the end, when Alda is shown up as being so bad at fixing people up that the novel begins to amuse, and even then the fun is tempered by the realisation of how much damage this sort of manipulation can do to people. It isn't a parody, but its publication date is close enough to the date at which it is set for it to require knowledge in the reader, just as a parody does; if it were a historical novel published now, The Matchmaker would contain a great deal more explanation. It is a competent and enjoyable novel, and yet it is easy to see that the spark of outrageous humour present in Cold Comfort Farm is missing; that is why one novel has been remembered while the other is forgotten.
Posted by Simon McLeish at 08:07 No comments: 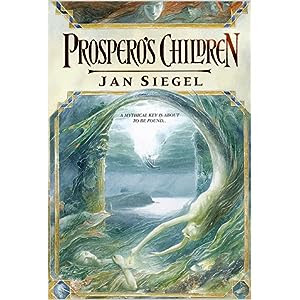 Since Snow White, the character of a witch stepmother is quite a common one in fantasy. Prospero's Children combines this with another idea frequently seen in modern fiction, if not in fantasy - children trying to indicate their disapproval of a candidate to become a stepmother. (This development in fiction is mainly a reflection of changes in Western society, where it has become usual for children - at least of a certain age - to be able to express an opinion on this issue.) So how can a sixteen year old girl tell her father that his girlfriend is (literally) an evil witch?

I suspect that this was the idea from which Prospero's Children developed. It is clearly close to fantasies aimed at children and adolescents - portions frequently reminding me of writers like Alan Garner or Susan Cooper - but combines this with a more adult sensibility, reminiscent in other pages of Clive Barker, or John Crowley. It falls into the subgenre of fantasy novels in which a mundane world is found to contain hidden magic, in this case the inheritance of the descendats of the dispossessed citizens of Atlantis who are known as Prospero's children. A talisman, key to the door of death, was lost in the destruction of Atlantis, but in twentieth century Yorkshire it is about to come to light again. At the death of a distant seafaring relation, the Capel family inherit a house on the edge of the moor near Whitby, and the children become suspicious when they realise that their father's girlfriend is more interested in getting into the house than in him as a person. In their Wuthering Heights influenced setting, the children gradually become involved in a world of magic, particularly once it becomes apparent that the sister has the gift herself.

Imaginative while grounded in the traditions of the fantasy genre, Prospero's Children is an admirable novel. It combines the immediacy of the children's writers mentioned with the stronger imagery of Barker, and makes a stepping stone between the works admired in earlier years and those aimed at adults alone.
Posted by Simon McLeish at 10:01 No comments:

Harry Mulisch: The Discovery of Heaven (1992) 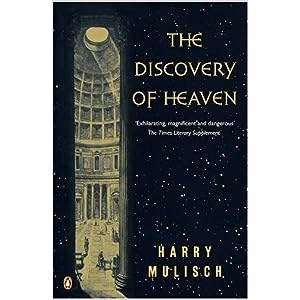 This novel charts the lives of two close friends, liberals in sixties Holland, and their love affairs with a Concertgebouw cellist. One of them, Onno Quist, comes from a patriarchal family eminent in conservative politics, while Max Delius' father was a war criminal executed for betraying his Jewish wife and in-laws, leading to their deaths at Auschwitz. This much background immediately demonstrates that politics and the legacy of the war will be two of the novel's major themes.

The Discovery of Heaven has another theme, however, as is indicated in the dialogues which separate its four parts and provide prologue and epilogue. These make it clear that angelic beings of some kind are manipulating Max and Onno for their own purpose: the production of a specific child to fulfil a particular destiny. This supernatural framework prepares the reader for the philosophical and metaphysical discussions which fill the novel, although it does pre-empt a fair proportion of them. I feel that as far as the majority of the novel is concerned, they should have been omitted; without them, however, the ending would make very little sense. The dialogues seem to be there to add a half-hearted touch of magic realism, which detracts from the strengths of the novel (the depiction of the relationship between Onno and Max, for example); I would have found a different method of introducing Quinten's destiny more interesting.

The main interest in the novel is, as I have indicated, its central relationship and the discussions between the two men involved (which makes it pointless to read the novel if you are uninterested in philosophy and politics). There are occasional amusing snippets, such as the "demonstration" that Bacon wrote Nabokov's novels, or the Cuban conference, which make me suspect that humour has been to some extent lost in translation.

The Discovery of Heaven is an enjoyable read, as intellectual as (say) Iris Murdoch, even if not so well put together. Parts of it are better than others; it succeeds best as an account of an unusual friendship.
Posted by Simon McLeish at 09:38 No comments: 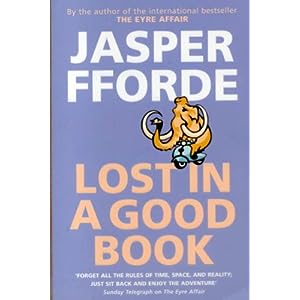 The second of Fforde's manic Thursday Next stories easily passes the first test of the comedy sequel: it is still funny when read almost immediately after The Eyre Affair. It starts with Next reluctantly allowing herself to be forced into taking part in public relations events; her work documented in The Eyre Affair has made her something of a celebrity, and the Big Brother style Special Operations units are determined to milk every last possible drop of good publicity out of this. On top of this, she is soon mixed up in new plots originating with the Goliath Corporation, who want her to bring back their executive Jack Schitt, whom she imprisoned in a copy of Poe's The Raven.

To read The Eyre Affair, an acquaintance with Jane Eyre is vital. There is no single book so important here, but much of the humour is derived from literary references, so the book is funnier the more the reader picks them up. The range of references is quite large, but will probably be familiar enough to anyone reasonably well read in English literature. (It helps, for example, to have some idea what Tristram Shandy is like, even if you haven't read it, or if you have at least seen a film or TV version of Great Expectations.) The analysis of The Tale of the Flopsy Bunnies is particularly amusing.

Lost in a Good Book is less of a constant string of jokes than The Eyre Affair; there is nothing in it to match the wonderful Rocky Horror Show style production of Richard III, for example. This may make it less hilarious, but it also becomes more interesting as a novel. (That is, apart from being less self-contained than its predecessor.) The disappearance of her new husband gives Fforde the opportunity to flesh out Thursday's character more fully. It's left me waiting eagerly for The Well of Lost Plots, due out later this year.
Posted by Simon McLeish at 09:15 No comments: