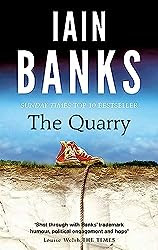 It felt like a significant, sad, occasion when I started to read The Quarry. This is the last time I will be able to read a book by one of my favourite authors for the first time, and it is a book which is infused with the news of his final illness and death in 2013, even though the similarities between the terminal cancer of the major character of Guy and the sudden final illness of his creator are apparently accidental, the book being written before Banks' own diagnosis. The awareness of this makes it tempting to either write about how it feels when a cultural figure of importance in your life dies, or to give the book a good review whether or not it deserves it, more a tribute to the person than an honest look at the quality of this particular work (as happened with Double Fantasy, the album which was released almost coinciding with John Lennon's murder, leading to the retraction of at least one prominent poor notice). I might give in to the first temptation a little (you may notice that in fact I already have), but I will definitely try to avoid the second: I hope that this will be an honest account of what I thought of The Quarry.

The first thing which strikes a reader of The Quarry is the narrative voice. The story is told by Kit, who is Guy's son. That there is something unusual about Kit is immediately obvious - he is autistic, basically, and thus his world view is pervaded by the way his mind works (for instance, the importance of the number of steps taken on the journeys he regularly makes on foot). It immediately reminded me, for obvious reasons, of Mark Haddon's The Curious Incident of the Dog in the Night-time, which is narrated in a similar fashion. Another, perhaps more apposite, comparison would be with William Faulkner's The Sound and the Fury, because the use of a narrator with an unusual way of looking at the world becomes of importance. How the reader feels about Kit's narration will effectively colour their response to the book as a whole.

The plot revolves about the resolution of three questions of importance to Kit and the group of Guy's friends who make up most of the rest of the characters. First, who was Kit's mother? Second, what will happen to him when Guy dies? And third, what has happened to the missing video - one of a series of parodies made by Guy's friends while reading film studies, this particular one has content which is potentially very embarrassing to some of the participants, and they are reluctant to explain why. The story is about these questions to the extent that the answers will pretty much determine the level of satisfaction that a reader feels at the end.

While making the reader wait to find out the answer to these questions (unless they skip to the end), Guy and his friends reminisce, take drugs, argue and rant about the state of the world. I found the rants in particular a little wearing on the patience - Guy's in particular being more similar to those of Ken Nott in Dead Air than perhaps is good for the individuality of the character. Some readers may find the pretty constant bad language hard to take, though Banks is probably not a writer you will read for very long if you are offended by swearing.

The static nature of the setting - almost all of The Quarry is set in a couple of rooms in a single house in a small town - and the nature of the plot - lots of lengthy discussions which go nowhere - makes for a less than engaging read in comparison to some of the more accessible Banks novels which precede it  (for instance, Espedair Street, The Crow Road or The Business). Neither does the use of Kit as a narrator match up to the more extreme experimentation of Banks' early career (Walking on Glass, The Bridge, etc). It's still enjoyable, just not great by Banks' standards. My rating: 7/10.

Posted by Simon McLeish at 18:37 No comments: