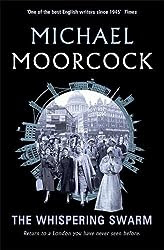 Are there any literary devices which have not been attempted in novels, by 2015? The Whispering Swarm certainly attempts one which I have never seen before. Many novels include autobiographical elements, but here Michael Moorcock mingles straight autobiographical material with historical fantasy. The autobiographical elements match my knowledge of Moorcock's life picked up as a fan of many years' standing; the fantasy elements centre round the mysterious Alsacia, a part of central London which acts as a refuge (this part is accurate, there was such an area which for historical reasons had the rules of sanctuary applied to it), and which can take those who find it to a semi-mythical London from the past.

Does the idea work? Basically, I don't think it does. There is clearly a desire on Moorcock's part to contrast the mundane real world and the glimpse beyond that in to fantasy, but this means that The Whispering Swarm feels like it is made up of distinct parts which could be pasted together sections from two different stories. It even feels as is though the prose style used changes, more matter of fact for the real world, more poetical and descriptive for the fantasy.

For most of Part One (the first third or so of the novel), Moorcock-as-character has either not yet discovered Alsatia, or is trying to ignore what he thinks might be a delusion. So the fantasy plays little part, and this left me as a reader wanting to skip forward to something more interesting. However, even when Alsatia plays a greater part, it too turns out to be fairly dull, and it is hard for the reader to invest in any of the characters, in either milieu.

The title refers to the noise Moorcock and a few others can sense, the combined voices of the inhabitants of this fantasy London. This is in itself an interesting concept, and would relate well to the themes of his best literary novel, Mother London. That is also about the mythic significance of London, and is much more successful, partly because it is a fully synthesised novel. The best urban fantasy evocations of London (such as those written by Neil Gaiman, Ben Aaronovitch, or Kate Griffin, among others) are also better at integrating the fantasy elements with a real world setting, and also possess a sense of humour which seems to have disappeared from Moorcock's recent work.

I have long been a fan of Michael Moorcock, since my early teens, but have found much of what he has written in the last decade unpalatable for one reason or another. Despite an interesting and unusual idea, The Whispering Storm also fails to impress me. My rating - 5/10.
Posted by Simon McLeish at 08:32 No comments: