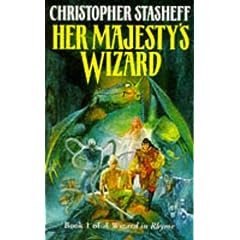 There has been a subgenre of light fantasy as long as there has been fantasy. The novels in this subgenre have an air of gentle humour and some elements of parody, though the comedy is not usually so broad as in the currently more fashionable novels of Terry Pratchett, Tom Holt and Craig Shaw Gardner. In my opinion, the master of such fantasy, generally written by Americans, was L. Sprague de Camp; more recent books of this type include Terry Brooks' Magic Kingdom series, the dragon books of Gordon R. Dickson and Piers Anthony's Xanth series.

Her Majesty's Wizard is particularly reminiscent of Dickson's The Dragon and His George with a dash of Alan Dean Foster's Spellsinger. It tells the story of Matt, a second-rate graduate student at an American university, who abandons his research to try and decipher a fragment of parchment which has accidentally come into his possession. As he finally cracks its peculiar linguistic structure, he finds himself magically transported into a world where the recital of verse acts as a magic spell.

This is a pretty typical opening for this kind of novel. Generally, the novel does not stray far from the paradigm, but where Stasheff differs from every other fantasy writer I have ever read is in the way he takes the Catholicism of a medieval setting seriously. In some ways he is not quite successful in this - the ease with which the prayer of a churchman affects events causes some problems in the plot - but it makes the mindset of his characters a lot closer to those in the ultimate source material of a fantasy novel, the medieval romances about Arthur, Charlemagne and so on. He is able to avoid the embarrassment about religious issues which makes so much fantasy rather coy on the subject; it is really unusual to see religion given something of the place it had in the medieval mindset. I particularly liked the way that the Catholic sacrament of confession was given such a strong and influential role, as it maybe should be in works based around a society in which every important person would have their own confessor.
Posted by Simon McLeish at 08:48