Lawrence Sterne: The Life and Opinions of Tristram Shandy, Gentleman (1759) 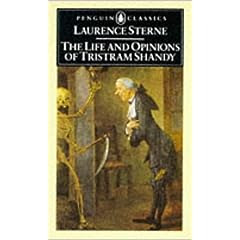 It is difficult to know where to begin in describing Sterne's famous work, as many commentators have remarked. It is not really a novel, such plot as it has being far too loosely structured for that. It purports to be an autobiography, but by the end of it we still know hardly anything of the life of Tristram Shandy. (Apart from scattered remarks, all we get are descriptions of the day of his birth, a day when he suffered an accident at the age of five, and a trip through France. We aren't even told enough to be definite whether the woman Jenny, mentioned in several places, is his wife or not.) In describing his opinions, the title is rather more accurate, though we probably get more of the opinions of Tristram's father than of Tristram himself.

I suppose Tristram Shandy is basically a parody of the memoirs of an eighteenth century gentleman. It is hilariously funny in places, though it requires some concentration to catch the jokes - I know a couple of people who found it impossible to get into. It certainly pays to keep a finger in the notes at the back of a copy, unless you speak Latin and Greek and are familiar with a vast range of literature from the classical period onwards, and know a fair amount about the wars of the early eighteenth century.

Tristram Shandy's importance in the development of the novel was in its narrative style, which prefigures many of the experimental writers of the twentieth century. It is not really concerned with the subject that it is meant to be about - which is why we learn so little of Shandy's actual life - but instead it is about whatever takes the fancy of the supposed author. It is full of digressions, imagined conversations with readers and critics, and Shandy as narrator gives a convincing impression of disorganised brilliance. Sterne, of course, has to be far more disciplined, so that Shandy never steps out of character. In an odd sort of irony, in fact, we are totally conscious of Shandy as narrator but never really aware of Sterne as his puppeteer.

This structure is meant to give us insight into the mind of Shandy, and is a direct precursor of one of the most important literary styles of the twentieth century, stream of consciousness. The book is full of conversations with readers and commentary on what is going on (statements like "I promise that the chapter on buttons will be written eventually, but I must give you the chapter on chambermaids first"). This may seem a little arch (though fashionably post-modernist) to our tastes today, but it can be very funny.

The work in the canon of English literature which is perhaps most like Tristram Shandy is Joyce's Ulysses. Both are universal in scope (Ulysses more subtly so) though apparently parochial; both establish a complex relationship between writer and reader. Both are funny and bawdy, though Tristram Shandy lacks something of the serious and pessimistic nature of Leopold Bloom; one is a product of the eighteenth century, the other of the twentieth.
Posted by Simon McLeish at 14:09