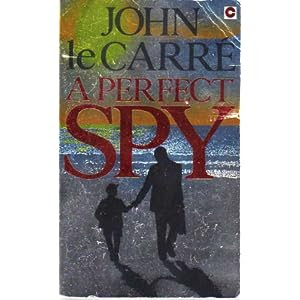 One of le Carré's non-Smiley novels, A Perfect Spy is far more about the psychological pressures which create a secret agent than about the mechanics of spying itself. It is part of le Carré's move away from writing genre thrillers that really began with Tinker Tailor Soldier Spy.

Magnus Pym is quite a senior operational officer, who has been running networks of British spies in Czechoslovakia for many years. After the death of his father Rick, Pym goes missing, and it begins to look as though he has been a double agent all this time.

His father's death leads Pym to take stock of his life, and he writes its history, principally detailing his relationships with Rick Pym and Czech spy Axel. Some of this is a bit confusing, as in his memoirs Pym refers to himself in the present as "I" and in the past as "Pym". Rick is the formative influence on Pym as a person, and he is the novel's major problem as far as I am concerned. Like Shamus in The Naive and Sentimental Lover, he is meant to be charming, but comes across as obnoxious. He is a con-man, with massively grandiose schemes, alternately successful and falling through. The qualities that Magnus inherits from him are the charm and the ability to put together and carry off a successful lie, at least for a time. This, and his allegiance to himself over any patriotic sentiment makes him a perfect spy in the eyes of Axel.

Basically, if you dislike Rick, as I did, the first two thirds of the novel will be heavy going. As far as I am concerned, le Carré is unable to portray charm; it is a difficult characteristic to put across, but all his characters who are supposed to have it seem to me to be unpleasant, self-centred and unscrupulous. The novel is part of le Carré's ongoing attempt to write like Graham Greene, but he doesn't have that kind of talent.
Posted by Simon McLeish at 15:32