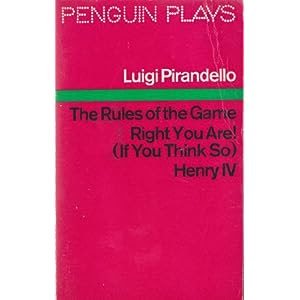 Six Characters in Search of an Author, Pirandello's breakthrough play, remains his best known, despite efforts (such as in the introduction to this collection) to declare Henry IV his masterpiece. It certainly encapsulates his interest as a dramatist (basically, in the different ways in which a part can be played) very cleverly, as well as being an effective drama in its own right.

In the first scene we see the first take on the idea of playing a part. Here, four men arrive, one of them new; they are to play the part of attendants to Holy Roman Emperor Henry IV. Unfortunately, the new one has assumed that the ruler is Henry IV of France, and so has read up and assumed the part of a French lord five centuries later. The four of them turn out to be attendants not, as initially seems, in a play about the Emperor, but to a rich Count who lapsed into madness following an injury received during a pageant in which he was playing Henry IV. That is another form of play-acting, and his delusion is a sort of unconscious playing of a part. (And the most famous scene from Henry's life involved him playing out a remorse and humility he most certainly didn't feel when he was forced to beg the Pope's forgiveness and was kept waiting barefoot in the snow at Canossa for days.) Of course, there is also the irony always part of Pirandello's work that all these characters are parts played by actors.

Even by itself, Henry IV is a pretty comprehensive review of the different ways in which people can play a part, and this is presumably the reason why people want it to be considered Pirandello's masterpiece rather than the more limited Six Characters. But the other play continues to be better known, partly because it has such an intriguing title, partly because the history behind Henry IV is to many people obscure, and partly because to an English language audience there is an obvious possibility of confusion with the Shakespeare plays of the same name.
Posted by Simon McLeish at 09:12