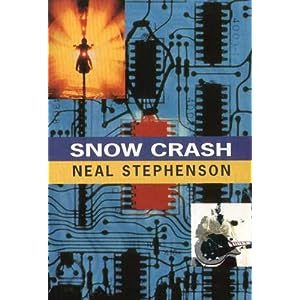 It takes a particular kind of writer to name their central character Hiro Protagonist, even if it is made clear that this is a nickname chosen by him. It amounts to a rather cocky subversion of the idea of a central character, and implies a certain level of confidence.

To a certain extent, this confidence is justified. Snow Crash is a cyberpunk story about a new computer virus which also affects people; this may make the novel sound typical of this subgenre, but Stephenson makes it stand out from the crowd. He brings in a wide range of references (including relating magic incantations to computer viruses, and an information theoretic interpretation of the story of the tower of Babel) which make the novel more interesting than the average Gibson-derived fare (though some of the explanatory sections are rather dully presented). In addition, he has created, in his central characters Protagonist and fifteen year old courier YT, more rounded characters than is usual in a tech obsessed novel, and presented them against a background which is almost a parody of the dark dystopian America common to much cyberpunk.

At the moment, the precise nature of the brain's information processing mechanism is not known, so that we do not yet have the capability to imagine what a computer virus that might affect it would look like, let alone to write one; in fact, we don't even know whether such viruses can exist. One thing which seems very likely is that any such virus will not be passed by showing a hacker a series of zeros and ones, even in virtual reality. Stephenson justifies this with the idea that binary code is something which becomes part of the Chomskian deep structure of the brain of a computer hacker, but I find this very hard to believe (especially as deep structure is a controversial idea itself).

It is the background which is the most interesting thing about Snow Crash. The idea that the US suffers a collapse into libertarian anarchy is fairly commonplace, but Stephenson takes it to an extreme, with little independent nations springing up everywhere in franchises (including ones run by the Mafia and Columbian drugs barons), and massive inflation (billion dollar bills as small change - with Ed Meese pictured on them). All this is to provide a contrast to the virtual world of the Metaverse, far stabler than reality, but threatened by the new style virus.

Perhaps Snow Crash's biggest flaw is that Stephenson is never quite sure how serious he is being, and so wavers between parody and thriller modes. Whichever it is, it is an entertaining early novel, harbinger of even better things to come.
Posted by Simon McLeish at 07:55