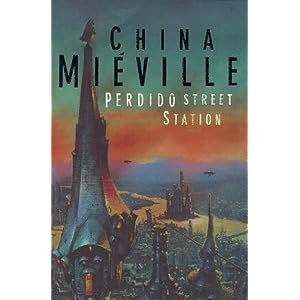 Miéville has received a great deal of praise for this novel and for his début, King Rat. Personally, I was unwilling to read to the end of King Rat, and found much that I disliked about Perdido Street Station; but it is plain even to me that there is much to admire about Miéville's writing.

The huge and dilapidated city of New Cabuzon is home to a variety of different species, including ones which have the appearance of insects and plants as well as humans. The central character Isaac is a human scientist - in this fantasy steampunk connection, something like a cross between an alchemist and a physicist and naturalist - who is approached by a garuda with a commission. This birdman has had his wings removed as punishment for an alien crime ("choice removal") and he wants Isaac to make it possible for him to fly again. To this end, Isaac collects hundreds of specimens of animals which fly, whether they do this magically or physically; but his work has to be suspended when a mysterious caterpillar turns out to be the young of a slake moth, an incredibly powerful and dangerous creature which feeds on thoughts and dreams. (Coincidentally, the slake moth is connected to an organised crime syndicate, the head of which has just approached Isaac's artist lover to create a sculpture of himself; this is a weakness in the plotting of the novel.)

Perdido Street Station is a very long and ambitious novel, and has space not just for a great deal to happen (far more than in the summary just given), but also for description of the city. This is something Miéville does in a way which makes the novel read like a cross between Irvine Welsh and Mervyn Peake. The story itself isn't particularly great; it is the background which is important and, good writer though he is, Miéville seems to have had some difficulty in extending his ideas over 700 pages. Some of the non-humans aren't particularly alien, the only one which really impressed me being the giant spider known as the Weaver. For me, though, the real problem is the relentless grimy feel of the novel, something which mars King Rat to an even greater extent. (It would be interesting to see whether Miéville is able to produce something different in future.) Ifelt as though I was being compelled to admire the technique in something I didn't actually like very much; a reason that only just kept me going to the end of the novel (together with the faint hope that Miéville would pull some kind of amazing trick at the end). To say that Perdido Street Station is a triumph of style over content would perhaps be going too far, but it is definitely a novel with tendencies in that direction.
Posted by Simon McLeish at 16:47