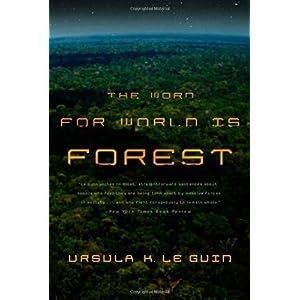 One of Le Guin's shortest novels is also one of her most effective. The Word for World is Forest is a telling description of the ecological and moral atrocities committed by a group of human colonists on a peaceful world covered in forest, and how their barbaric treatment of the apparently passive Athshean natives provokes a bloody uprising, leaving the natives changed forever, fallen, as it were, from their state of innocence.

The Word for World is Forest was not quite long enough to qualify for the best novel category in the Hugo awards (which she won twice), but it won the best novella category, before appearing in stand alone book format in 1976 (it originally formed part of the famous anthology sequel, Again, Dangerous Visions).

Like much of Le Guin's work, this novel is inspired by her knowledge of anthropology. Indeed, there is little of the novel which demands a science fictional setting: the "world" could fairly easily be some remote part of Africa or New Guinea. The point of using science fiction, other than Le Guin's established reputation in the genre, is that it enables the writer to create her own background, one which emphasises the points she wishes to make. As a result, the story does sometimes seem rather one sided, but the spiritual effects on the Athsheans which result from their espousal of violence are in the end striking: by becoming as vicious as the humans, they destroy a precious part of their culture forever, knowing that this will be the outcome of their actions.

In one way, Le Guin does undermine the point she is trying to make, as far as I am concerned: she adds a feminist element. The culture of the colonists as she depicts it is extremely male-dominated; human settlements are basically logging camps filled with macho lumberjacks where the only women are prostitutes and concubines. These women have no voice in the story: they don't even have names, being referenced by their measurements; they are objects used by the men for stress relief. They do show that the men can behave bestially towards people far more like them than the Athsheans. In the end, unless her overall point is less than I think it is - unless Le Guin is saying that a culture in which women are less than equal with men is capable of terrible crimes - the women are a distraction and dilute the impact of the story.

In the author's note at the beginning of Knowledge of Angels, Jill Paton Walsh wrote: "A fiction is always, however obliquely, about the time and place in which it was written." The Word for World is Forest is not really about aliens and the future, but about us, here and now - at least, as much as the world has not changed in the last forty years. It is an attack on colonialism, both as practiced in the past and in our own time, as rich western nations grind the so-called third world in poverty and hopelessness - and it could well be intended as a warning to the complacency of the western world. It obviously exaggerates for effect, as no earthly culture has ever been as innocent as the one portrayed here. There is also an underlying criticism of science fiction in general. The theme of the colonisation of an alien planet by humans is a commonn theme in the genre, and usually the author is put firmly on the side of the plucky colonists. But, Le Guin tells the seventies SF community, that is not the only imaginable side of the story. There are often clear parallels between tales of colonisation and westerns, and Le Guin is putting the side of the American Indians.

Re-reading The Word for World is Forest, I was struck by just how much it seems to have influenced a film made almost forty years after the story was published: Avatar. The Athsheans are not hugely similar to the Naavi, but much about the setting and the ecological parts of the message are really close. I'd recommend the book to anyone who enjoyed the film.

Though others might choose The Lathe of Heaven or The Left Hand of Darkness, my choice as Le Guin's greatest work would be this compact story. Even so, it has never inspired the affection I still feel for the first of her books I ever read, the Earthsea trilogy. The Word for World is Forest is Ursula K. Le Guin writing uncompromisingly an unpalatable message for adults; it is not a novel the reader is meant to like, but one which is meant to hammer home its point. My rating for one of the most effective uses of science fiction: 9/10.