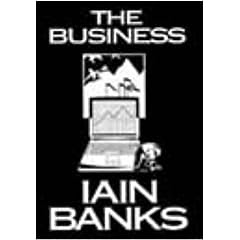 The Business is a shadowy commercial operation which has been in existence for thousands of years, and which now aims to buy itself a country, so its senior executives can gain the privileges which go with a diplomatic passport. Kate Telman, the narrator, is not quite up to that level, but is one of the rising stars in the Business, and it is not particularly surprising when she is asked to become an ambassador of sorts to the Himalayan kingdom of Thulahn to arrange the purchase of the country from the reigning prince, particularly as he is known to have a strong fancy for her.

The Business is, of course, designed by Banks to be the kind of organisation which attracts conspiracy theories, even if Kate is quite vehement in denying them ("We're not a cover for the CIA. They're the Company, not the Business."). This aspect of the novel is entertaining and unusual: most conspiracy theory novels are written from the point of view of an external investigator, rather than someone closely involved in what could clearly appear sinister to an outsider even if considered relatively innocent by herself. Kate has strong reasons to be grateful to the Business, which lifted her out of the deprived background in which she was born, but she is not entirely naive about the organisation and some of its senior members. She is one of several female point of view characters used by Banks (Canal Dreams, Whit, and Against a Dark Background provide other examples), and is reasonably convincing if a little bland.

The star of The Business is Thulahn, which is an exaggerated version of Bhutan or Nepal, content to remain one of the remotest parts of the world. The people may be poor, but at least they're happy. The questionable benefits of Business sponsored development programmes begin to make Kate think twice about the whole deal, but in the end the country's portrayal is too idyllic for the issues to have real meaning.

If The Business has a message, it is one it shares with Whit. This is that it is possible - and maybe easier - to be happy without the distractions of modern Western culture, without the consumer luxuries with which we are surrounded. (Whit makes this point more effectively, as its narrator is one of those on the outside of consumer culture, while Kate lives a life of corporate luxury.) Banks is surely trying to say that we should look at our own lives to see what in the material world is really important, what really brings us happiness.

This is one of the reasons why The Business lacks the significance of Banks' earlier novels - or other novels about the third world. Compared to, say, The God of Small Things, it has nothing to say; it lacks the brilliance of The Bridge or the immense shock value of The Wasp Factory. Banks seems to have become a bit too comfortable, but is still a good writer and extremely entertaining.
Posted by Simon McLeish at 11:59