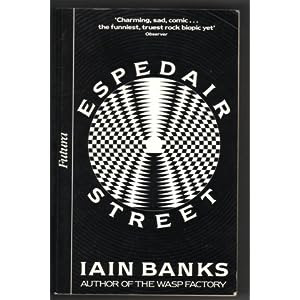 Ever since I first read it, not long after it first came out, Espedair Street has been one of my favourite Iain Banks novels. It is his first more or less mainstream novel, neither experimental nor genre fiction, and every time I read it it still manages to amuse and move me.

Espedair Street is a novel which is pretending to be a rock star autobiography; the story of (fictional) seventies band Frozen Gold as told by bass player and song writer Danny Weir (known as Weird). It is told using one of Banks' favourite devices, the series of flashbacks which converge to and explain the present (Danny living as a recluse, pretending to be his own caretaker in a bizarre Victorian folly in Glasgow). Espedair Street is about the emptiness that can come to fill the life of someone who has realised all his dreams on a massive scale. It's about lots of other things too - the hedonistic life of a seventies rock star (modelled on the excesses of bands like Fleetwood Mac); the things that we do that we regret and feel guilty about later, and the effects that these have on us; Glasgow and the people who live there.

Much of the pleasure (and certainly the humour) provided by Espedair Street (named after a place in Glasgow where several important events in Danny's life occur) is derived from the accuracy with which much of it mimics "warts-and-all" rock journalism, and it has in fact been turned into a radio serial which takes precisely this form, complete with music written by Banks himself. This makes it immediately believable as a novel, the ludicrous actions of band members being no madder than many documented of real musicians.

Espedair Street's main weakness is the sentimentality of its ending; this quality begins to creep into Banks' writing from this point onwards, making it more accessible but bringing occasional disappointment.
Posted by Simon McLeish at 11:28