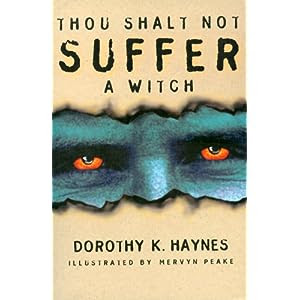 Dorothy K. Haynes was not a name I had come across before, my eye being drawn to this short story collection because it was illustrated by Mervyn Peake. It is easy to see why the stories captivated an initially reluctant Peake (to the extent that he produced an extra "illustration to an unwritten story by Dorothy Hayes" for which a tale was duly produced). The stories are about atmosphere, for the most part exploring the edges of the supernatural. The title story is typical: a Crucible-like tale of a young girl frightened into making accusations of witchcraft. Many of them take the point of view of a lonely small child, an echo of Haynes' own orphanage upbringing.

In this edition, the original collection is expanded about half again with some of Haynes' later stories. The standard is high, but the tales are very uniform; it is a collection to read in small doses. The apparent lack of development is quite surprising, given the inclusion of the later work. Though probably found in the horror section of a bookshop or library, Haynes' stories are not really frightening despite the occasional gruesome touch. This is partly because none of them have a formal plot, being more like a passage setting the scene for a novel than a conventional short story; and yet, they are complete enough in their creation of a dourly Scots world tinged with the supernatural that they are extremely satisfying.
Posted by Simon McLeish at 08:37